Did You Know? Indiana-grown and Indiana-processed ethanol is a renewable fuel that benefits Indiana’s economy.

Cleaner Air
Using ethanol blends reduces greenhouse gas emissions by almost 50%. In fact, ethanol use in the U.S. reduces GHG emissions by the equivalent of removing more than 11 million vehicles from the road for an entire year. Ethanol is not only cleaner, it adds oxygen to the fuel, which helps combust more completely in the engine, reducing the levels of toxic emissions and harmful particulate matter from the exhaust. That means cleaner, healthier air for all of us.

Renewable
Starch from corn is the most common feedstock used to produce U.S. ethanol. The starches are turned into ethanol that can be used in vehicles. Ethanol is homegrown in cornfields, with a new crop produced every year.

Locally Grown
Whatever the source, more renewable fuel can be "grown closer to home" today. Each year, more than 15 billion gallons of ethanol were produced from locally grown materials, providing jobs and support to local economies and a shorter, more secure supply line to your community.

Additionally, each bushel of corn transformed into ethanol also produces animal feed, which is fed to beef cattle, dairy cows, pigs, and poultry. So when we make ethanol, we're making fuel, feed, and food - all from the same bushel of corn.

Selecting the Right Fuel Octane and When They Should be Used

Pull up to a fuel pump today and you have a wide range of choices available to you.  And that's a good thing. But it can be a bit confusing with all the buttons, numbers, and stickers on the pump.

When you fill up your vehicle, price is certainly a consideration. But so are engine performance, environmental impact, air quality, and the source of the fuel you select. So be sure to pick the ethanol blend that works best for your lifestyle, the performance of your vehicle, and the well-being of our planet and air quality.

A fuel blend of 85% ethanol and gasoline. e85 is designed for use in flex fuel vehicles (FFVs) and provides great clean air benefits to you and our environment. Be sure to check your owner's manual for fuel recommendations.

A fuel blend of 15% ethanol and gasoline. E15 is designed for all passenger vehicles model year 2001 and newer. Flex Fuel Vehicles (FFVs) may also fill up with E15. E15 should not be used in motorcycles, boats or small engines.

Usually only recommended for cars with high compression engines, such as sport or luxury vehicles. Unless specified in your owner's manual, using a premium blend offers little to no benefit. This fuel may contain 10% ethanol as well.

Approved for use in all vehicles. In fact, it is the most commonly used fuel in the U.S. this fuel usually contains 10% ethanol (E10) Ethanol is added to regular unleaded fuel as an oxygenate to help reduce carbon monoxide and soot. It is also approved for small engines, such as lawnmowers, boats and motorcycles.

Diesel fuel can only be used in diesel engines and may contain up to 20% Biodiesel. Biodiesel is another form of renewable fuel but is designed for diesel engines and made from a variety of high-quality oils and fats, such as soybean oil and distillers corn oil. Diesel pump handles are typically green in color.

What is Octane?
Those numbers on fuel pump-87, 88, 91, and 93-signify the octane rating of fuel. Octane is a measure of the ability of a fuel to withstand compression before igniting. The higher the octane rating, the less likely the fuel is going to pre-ignite at higher pressures and damage your engine.

Ethanol is a clean source of octane that burns more completely. Other common octane enhancers contain toxic components that have been linked to heart disease, brain and lung cancer, and respiratory disease. Choosier ethanol blends reduce the levels of these toxic components in fuel and in tailpipe emissions.

RU Cool 2 Flex Fuel?
There are several ways to determine if you have a flex fuel vehicle (FFV). Check your owner's manual. Usually the 'fuel section: will indicate if you can use ethanol blends above 15%, such as E85 in your vehicle. Many FFV vehicles have a yellow gas cap and/or flex fuel decal on the truck or tailgate.

How does a FFV work?
Al flex-fuel vehicle has a computer that automatically adjusts for the amount of ethanol in your fuel, so you can fill up with any ethanol blend (From E10 to E85) in any amount at any time. It's the ultimate in consumer choice, allowing you to purchase from a wide range of fuel choices based on price, performance, availability, and your preference. 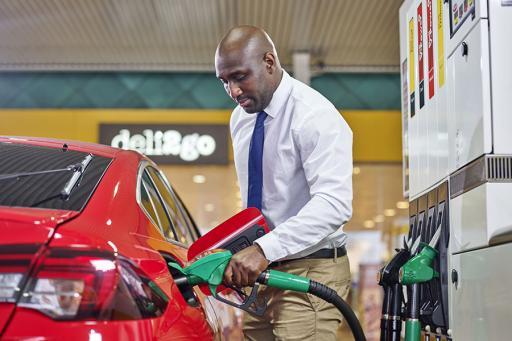 Get automatic Gold Status and save 30¢/gal on your first fill-up at Shell when you join the Fuel Rewards® program by 12/31/23 and make your first transaction within 30/days of joining.  After that, save 5¢/gal every day on each individual fill-up of up to 20 gallons from participating Shell stations.

Discover more about your fuel choices at the pump - Indiana Office of Energy Development.
To learn more about Biofuels or to find an E85 station near you, check out the U.S. Department of Energy’s Alternative Fuels Data Center at www.afdc.energy.gov.

Be sure to check your owner's manual for fuel recommendations.